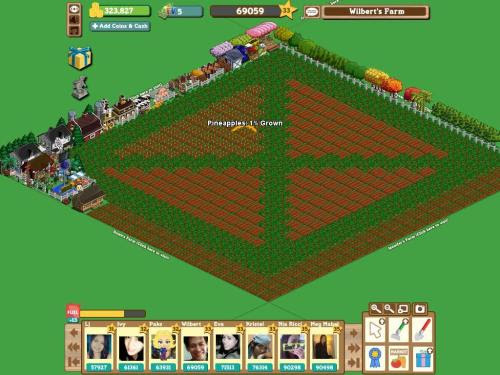 
One morning, I barged-in at the library to tend at my usual task, which is reading a newspaper. Upon entering, I noticed several students huddled on two computers at the IMS Section…hearing some saying the words: eggplant, cow, harvest and wheat. Disregarding the noise, I continued until few minutes later, while reading the Inquirer, I was bothered seeing the restless students…some noisily couch and cheer while the rest stand firmly but with all eyes on the computers. Annoyed but alacrity of knowing what’s going on, I approached the group and took a glance on the monitor then I read the word “Farmville” and saw on the background plots teeming with crops. I sighed, “Oh! It’s a farmers’ game.”

Since I’m a farmer and belongs to a family of farmers, too, I turned interested with Farmville so I got the nerve to research about it thru the net at home, one evening. Before searching, I logged in my account at Facebook then begun surfing. I was surprised to know that it’s simply imbedded at the Facebook’s applications. I’ve been maintaining my FB accounts for more than a year but it was then my firs time to open a game in it. Eager to explore Farmville though still unknown to the mechanics, I tried and experienced the ever first time in my life “virtual farming”…’twas a funny start.

When I scavenged informations and dug up the Farmville’s story, I learned that it’s a social game developed by the Zynga Company and they launched it last June 19, 2009. Since it’s launched, it rapidly gained millions of client users. I was surprised to know that today, Farmville user enormously increasing by a million per week. Wow! It is amazing that so many people patronize this virtual game. This social game is now a world’s giant online game serving several millions of users. Really, the population is huge within the Farmville community…the rapid increase is so astonishing!

There’s a cash flow in the Farmville game, there’s income on every harvest and there are bonus amounts from such visit to neighbors’ farm. I wonder if these dollar pennies can be converted or enchased into real cold cash. Hmm…that could be a good and opportunity for all who are fond of Farmville to earn real cashes. On the other hand, I could not wait that one time; the virtual money accumulated may be used to trade or purchase desired actual products. That would be an easy way to linger a market life via online transactions. It will mean a convenient way to access financial resoureces in just clicks.

Repeatedly, I played Farmville…it lures me to check the game frequently or else the crops planted may wither if they’re not harvested a lengthy time.

Now, something I learned from Farmville; just like in real farming, crops need to be tended and harvested within certain time or else they’ll wither or left unbeneficial. Endeavor, time, capital and labor are of waste if the crops are left unattended in long time or they are abandoned. Abandoning crops, fowls and livestock means loosing a farming livelihood…and losing will let you weep in misery.

Care for crops, animals as well your whole farm; Farmville players…all have the swelling amusement in this game, happy virtual farming! I hope you could be convinced to love farming in real life…farming is a dignifying occupation because you have the opportunity to procure food for everyone who’re waiting for something to devour.