Scented Mirth
Generosity and compassion are the traits that could be inseparable to a person with a good heart. This could be a manifestation of the involvements I had during the summer activities I went through; the Holy Week and the Kateki-Zamer.
I was hesitant on the onset of the activities for in fact I’m quite afar and I have to gamble with unpredictable trips of jeepneys in our “sitio” in Bgy. Tinga Itaas (border of Soro-soro) and as well the scorching heat of the summer. If jeepneys’ trips faltered, then, I have to ride on a tricycle paying exorbitant fares. Well, in God’s mercy, I went through it successfully. I was thinking that those simple conflicts were only trials that tried how determined I was in those trying days. Later on, I reflected and realized that perhaps things meant to happen like tricks…in the beginning they’re difficult and for sure in the end is very rewarding.
On the face of the uprising activities, I continued my mission…to join the religious activities for everyone’s sake. In the recent Kateki-Zamer, there I met various children that are products of different family upbringings. There I met the most “rude boy” Joben.
During the first day, God perhaps destined me to have a close encounter with a person of great spiritual need. I could clearly recall the statement emphasized during a retreat I attended, “there is something good in you” in the Parable of the Pencil. Yes, it was a tricky game. On the first day, the boy tried to escape and come home while the class is ongoing. I made all my best to convince him to return. Minutes I spent, I did not surrendered. At last, he returned…same thing I did to other boy like Jomar, both did similar things on the succeeding days.
Rude he was, Joben, I got a chance to talked with him personally. He admitted that he was hungry, he beg alms, has a gambler-father, have five siblings, and many more. His revelations were slaps in my personality…similar pain refreshed for we had a similar childhood experience. Unknowingly, I’m innocent of the goodness behind his rude mask of behavior. In a snack time, he set aside his snacks (drinks and breads) then preferred to play. I asked why he won’t eat for the meantime. He told me that those snacks will be for his siblings, he will bring them home. It was a shock how thoughtful the boy is…I never expected it. Truly, though how naughty a person is, still, there is a hidden goodness in him. I was touched with that attitude…for the thoughtfulness he has for his siblings. He set aside the food not for himself but his siblings…though the foods are in his hands, still, he sacrificed not to eat them.
The richness of one’s behavior can’t be measured by mere staring  on one's  personal appearances. As the saying says, “don’t judge the cover of the book.” A person with untidy appearance could be the best person ever you met during the day. A person with foolish manner could be the person who helps you during a certain trial. The one whom you ever doubted could be the person who defies you from misconceptions. We never know…behind dirty faces are luminous souls inside, good hearts within, and a profound principle embedded.
Like the mirth on our face, it seem simply a dirt in far gaze. Little we know, perhaps some of these mirth could be the finest, who knows these could be specks of powdered golds? In this fruitful encounter, I’ll always cherish the spiritual learning I had…be unselfish! # 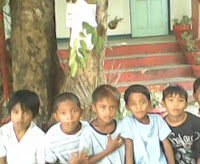